Since my last blog I have competed 3 times at the Olympics so I’ll share a little of my excitement with you.

First up following a beautiful week of skiing in sunshine at Laura cross country stadium was the 30km skiathlon. I felt I skied well for the classic section holding a position just above my ranking, once onto the skating I felt a little flat and although my skis were gliding well in the stadium area I was losing ground to those around me on the lower parts of the course. A little disappointed following the previous week’s success in the same event but still a decent result in an incredibly strong field on a brutal course. The worst ranked skier in the race had 86 FIS points, a listing low enough to qualify for Team GB, something I really wasn’t sure I was going to do at the start of the season.

Next up after a day of recovery was the skating sprint. Not usually my cup of tea, although it being on such a long and hard course tipped things a little more in my favour. I started 15 seconds behind Australian skier and good friend Callum Watson so set out with the aim of closing down on him as much as I could. By the top of the first climb things were looking good, I had closed a couple of seconds and was feeling strong. Callum disappeared out of sight briefly as we descended prior to the final climb before quickly reappearing as I rounded the tight corner and found him wrapped round the barriers on the outside of the track (He was OK, the same corner claimed several other victims including three skiers in the final). The final climb is like nothing else I have ever seen on another sprint track, I nearly fell over on the way into the stadium as my legs were so full of lactate from it. I finished up in 62nd with easily my best sprint of the season.

My final competition was the 15km classic time trial. Usually for a ski race it is normal to wear a thermal under your race suit and under extreme cases possibly two. For 15°C and sun you can forget the race suit top, get a t shirt on and think about how many drinks you will want to be handed up during your race. My race went OK, I asked for a little more klister than I probably should have which didn’t do wonders for my glide but my grip was solid! I was caught by team mate Andrew Young on our final lap which either meant I was pulling a parachute or he was flying, Thomas ran alongside us to tell Andrew he was in 32nd so I realised it was mostly the latter.

I now had ten days to enjoy the Olympic environment and do some training. I had a fantastic time, it was well worth the effort involved in the whole process of getting there!

A particular highlight of my experience away from competition was the closing ceremony. Having left the endurance village for the ceremony without any staff, we as athletes had received very few instructions as to where we were to meet the rest of team GB when we arrived in the coastal village. To cut the story short, we didn’t find them and ended up marching into the packed stadium with Kazakhstan. Despite being handed Kazakh flags to wave, a couple of things prevented us from blending in, namely our navy blue jackets in a sea of yellow and mint green.

I’m now at home and hoping I’ll be feeling a little less like I’m going to cough my lungs up by Monday when I head out to Drammen for the Worldcup on Wednesday. It’s been great to see my family and a few friends again after nearly four months away but I’m looking forward to a few more races before calling it a season. 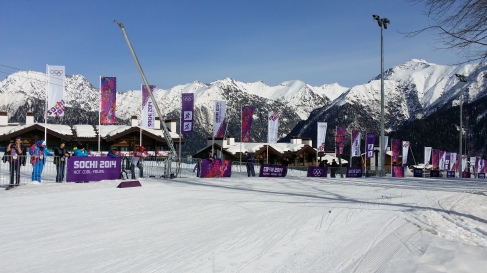